Week 5: Everything Happened At Once

I am not lying when I say the last week has been absolutely full of happenings! I logged on last Tuesday to find an Orc Death Knight and finish Love is in the Air, finally snagging one in Dalaran after a guildie spotted one and summoned me (he was trying to taunt Alliance by staying just inside the Horde area, but I got LoS from a rooftop). That triggered the holiday achievement and then the whole What A Long, Strange Trip It's Been meta achievement! FINALLY. A whole year later and I have my Violet Proto-Drake, free Master Riding and a bit of a break when the holidays roll around again! 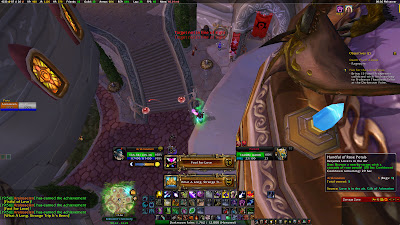 That wasn't the end of my day though - we'd scheduled an extra raid night to get Madness down as we were so close...Discombobulated downed Madness (10-man normal) last Tuesday after a lot of hard work from more than the 10 people in the group that evening. Hitting 8/8 normal mode was a fantastic feeling (we one-shotted it yesterday evening too, for a true farm kill). To top it all off, Maw of the Dragonlord dropped - twice! - and I was lucky enough to pick one of those up too. What a week! 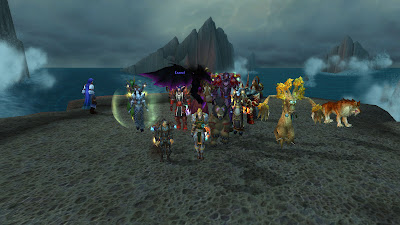 After all that excitement it was hard to think about the bucket list but I rolled up my sleeves and this is what I got done:
My pocket tank and other guildies were kind enough to run me through some normal Cataclysm dungeons, once I'd bought a couple of items to boost my ilvl (because of my heirloom head and cloak). I felt a bit bad cheating my way into them but after I discovered I was keeping up with other at-level DPSers I figured it was fine. Morríghan has gone from ilvl 188 to ilvl 245 in the last week - thanks mostly to crafted Redsteel armor - so she's genuinely qualified for two normals and can pull her weight in the other two. Huzzah! The chunks of exp I'm getting (with rested bonus) for these are far more appealing than questing alone so I'll be running dungeons here and there until I hit 85.

We finished running the worgen through their starting zone so Nefarna is waiting in Darnassus at level 13, soon to be sent to Darkshore. I've run that zone twice already though, and I have two other night elf characters waiting in the wings so I might get her summoned somewhere new like Redridge Mountains and see those quests now they've been revamped. I've gone for Destruction as my spec because I like the idea of raining fiery doom down on my enemies later on (I have no idea if this is efficient for levelling or not)!

The Darkmoon Faire took up a whole evening - ferrying all the professioned alts there to do the monthly quests takes time! With +5 to professions they're silly to miss though.

Finally, Ara got a buttload of a/p this week. We ran through 10-man normal ICC on Friday, as we were lacking some crucial people for a Madness kill. Our fantastic guildies who were raiding back in the day ran us through every achievement they could and we almost got them all! Getting LST and killing Deathwing didn't hurt, either. I'm hoping to write my LST thoughts up at some point soon :) 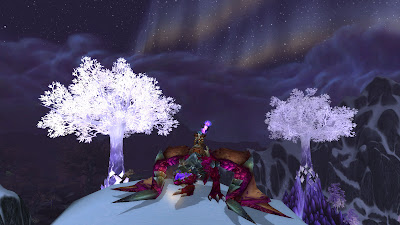 So, I'm not sure what to work on this week! The dungeon-only resolution for Morríghan puts her out of the running, so it comes down to shaman vs. low-level alts. I might just see what takes my fancy as I go.

What have you been up to this last week in Azeroth?
Posted by Aralosseien at 11:46