We frolicked through Molten Core again this week and I was lucky enough to pick up the Tier 1 hands and legs for my druid! 2 pieces down, 6 to go. I also managed to keep my pocket warrior happy with another two pieces of his Tier 1 set. Clicky on this link to see the full list of what dropped for us this week. We've decided to stockpile the materials that we're looting in an alt bank so that we can craft older epics for ourselves or guildmates once 4.3 hits - there is some great-looking craftable gear which still needs these older components.

Have you been running Molten Core at all, or any of the older raid content? Have you had any luck with drops yet? Let me know below!
Posted by Aralosseien at 14:55 3 comments:

I was frolicking through UBRS the other day, attuning myself to the Orb of Command so I could get into Blackwing Lair quicker to farm my Tier 2 pieces. (Pro tip: attuning yourself and then trying to get friends in via Have Group, Will Travel does not work. It looks like you all have to be attuned to use the Orb. Can anyone confirm/deny this?)

Of course, I found myself in The Rookery and just couldn't resist the lure of a new title! My memory is clouded by the haze of recklessness that descended, but I believe it went roughly like this:

Kill patrols. Go Bear Form, trample all the eggs. Realise that there are many, many whelps. Panic slightly. Shift into Moonkin form, hit Barkskin, Starfall + Hurricane. Flail wildly at the many whelps that aren't dead. Drink a health potion, Hurricane and cross fingers. Get achievement! Breathe large sigh of relief. 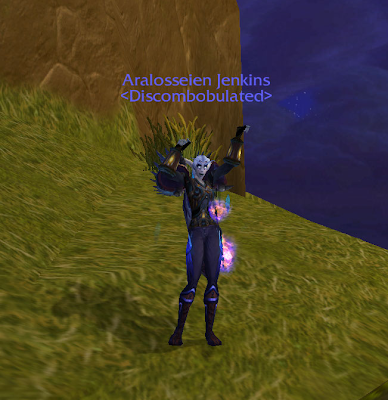 Did you pick up this title on purpose, or did you stumble into doing it accidentally like I did?
Posted by Aralosseien at 12:17 4 comments:

Email ThisBlogThis!Share to TwitterShare to FacebookShare to Pinterest
Labels: titles

Welcome to the first installment of 'Hunt for Tier Gear'! I had this idea a few days before the patch 4.3 announcements, after picking up T11 shoulders for my druid (finally!) and the T11 helm for my paladin. Getting these highly visible bits of tier gear was immensely satisfying - I felt like I had something to show for my efforts that couldn't be bought with VPs. I started looking up old druid tier sets and put together a plan of action to farm them, from Tier 1 right through to Tier 10. Such a big list, with so many notes - heaven!

The patch 4.3 news and the announcement of Transmogrification, accompanied by 80 slots of Void Storage, put an end to any restraining concerns of space and also gave me a good kick up the behind to get started.

Each 'Hunt' I start will be updated when I run the relevant content but there will links on the 'Gear Hunt' page at the top of the blog. I'd like to give other gear-hunters an idea of how long it might take because this is new ground for me, and doubtless will be for other people who started playing in WotLK or Cataclysm. I'll list the tier items that dropped each week and there'll also be a running total of materials which dropped for me - you could either hoard these for crafting professions (as I will) or sell them to fund your fashion needs! 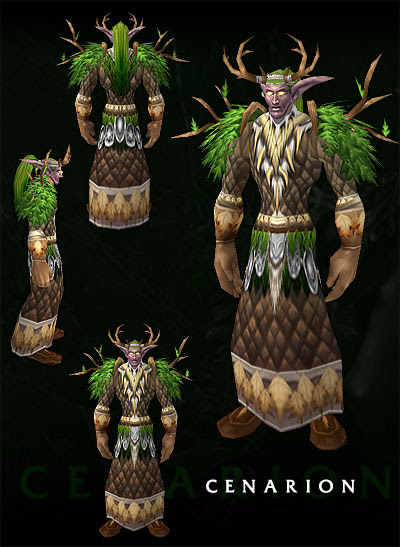 Let's begin the Hunt for Tier 1! The Cenarion Raiment isn't widely adored by players, but I really like it. All the pieces drop in Molten Core - the belt and bracers as BoE from any mob, the rest from bosses. Ragnaros drops Tier 2 legs, but no Tier 1 pieces. Whilst running Molten Core, you gain Hydraxian Waterlords reputation (trash rep from Neutral to Revered, boss rep from Neutral to Exalted).

[Sulfuras, Hand of Ragnaros]
[Thunderfury, Blessed Blade of the Windseeker]

I'll be writing mini guides on how to obtain these soon.

Molten Core is ridiculously easy to clear. I think any class is capable of soloing it now but for fun I got my partner to bring his warrior. If you've never been to Molten Core, Ragnaros is still pretty imposing! He managed to kill my meatshield warrior with a huge knockback and the resulting fall damage, so if you eat a Hand of Ragnaros you might have a corpse run on your hands.
No druid tier gear dropped this week, but the warrior tier pieces have bought me company for future runs!

By now, you've all heard about patch 4.3 and the new features it's adding to the game. A raid with Deathwing in and some new 5-mans - no more trollroics? YES! - is definitely exciting. Personally, the thing I'm most excited about is Transmogrification - the ability to give your existing gear the outward appearance of other gear you own, as long as it's the same armor class or weapon type. This heralds an end to uniform appearance at certain levels and will allow those of us who like the look of older/lower-level gear to customise our outfits! The addition of Void Storage, 80 slots of extra non-bank space for your armor and weapons, is the icing on the cake.

You might think I'd be quite bitter about this, as I spend most of my active time in giant laser chicken form. I won't deny that it took a little of the sparkle out of the news, but I spend all my downtime out of form. Seriously, the moment my UI reloads after a hearth? POOF, night elf again. So you won't find me kvetching about the change.

What you will find soon is the first post in my 'Hunt for Tier Gear' series. I'm planning to make my way through old content, starting right back in Molten Core and collecting as many of the old druid tier sets as I can. I'll be detailing which pieces make up each tier along with where they drop or where to buy them from. For those of you who multi-task on everything in WoW (we are many, and I salute you) I'll also note if there is a reputation you can grind at the same time, any achievements you could pick up and details of the legendaries you could obtain!

First up will be Tier 1, which drops from bosses in Molten Core. It's certainly a quicker way to see Ragnaros nowadays!
Posted by Aralosseien at 13:45 4 comments: