We did it! My lovely guild spent the night charging foci and doing special fights with me, and now I have the [Branch of Nordrassil]. I wish the title was permanent! There's a little leaf that pulses at the neck too, clearly showing that this is meant for druids first and foremost (no bias, honest).


I'll be writing up my legendary journey so far on Sunday, so that'll be up by next week!
Posted by Aralosseien at 16:35 7 comments:

Sometimes, I pick my next achievement grind purely for vanity reasons. I know, I know...you're shocked, right? When I saw Melyanna of The Dreamy Druid on her new White War Talbuk, I was instantly smitten with that mount.

I have killed so many goshdarned ogres. If I never see another ogre, I'll be happy! It was all worth it though, because today I reached Exalted with the Kurenai. 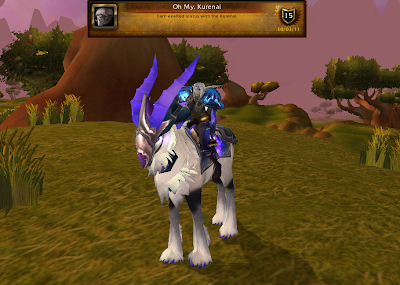 Of course, motivation was easy to find when the Kurenai provide eight new mounts (taking me to 74/100 mounts for Mountain O' Mounts) and another tabard. My completionist tendencies are showing again, aren't they?

If you're looking to reach Exalted with this faction, you'll want to do all quests that grant Kurenai reputation, which total ~15,000 and will save you a few hours of grinding later. There's a handy list of quests here. Pro tip: both the quests and the mobs will give rep right up to Exalted, so don't worry if you already have some Kurenai rep built up. 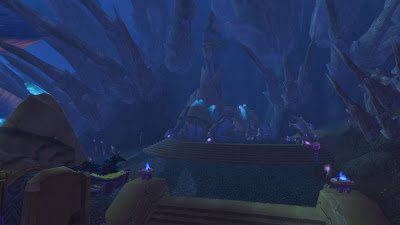 Start at Orebor Harborage in Zangarmarsh, home to a small group of Kurenai that are strengthening ties with the draenei at Telredor. You start at unfriendly with this faction but they will allow you chances to prove your worth, as part of the Alliance the draenei belong to. Take all the quests that Ikuti gives you, as well as the 'Wanted' poster quest. When you reach neutral, Puluu and Maktu will also have quests for you. 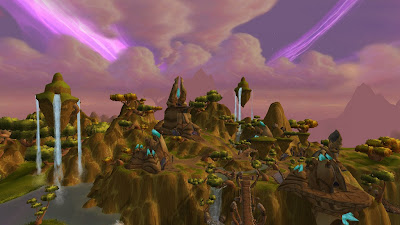 Once you've completed the quests at Orebor Harborage, head to Nagrand and the Kurenai settlement of Telaar. Most of the quests you need to do start here but there are two exceptions. The first starts with a frustrating Kurenai child named Corki who's trapped in a cage at the Burning Blade Ruins. Apparently he doesn't learn anything from this incident - you have to rescue him three times and I guarantee that you'll be tempted to leave him in the cage by the third! The second is an escort quest starting at Sunspring Post. It appears when you reach Honoured and all you have to do is escort the captive to the main road, fending off the usual ambushes. 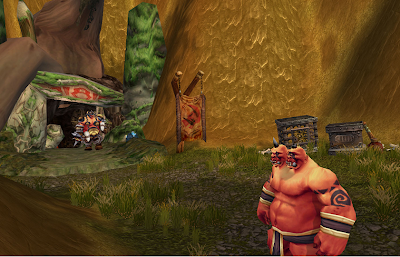 As you travel around killing ogres and such, you'll be getting small amounts of rep per mob (10-11 depending on your guild perks) and picking up Obsidium Warbeads. There is a repeatable quest to turn in 10 of these warbeads for 500-550 rep! Thank goodness for that. I gave myself a break from ogre-killing by heading back to Telaar every 50 or so to hand them in and see how much closer I got. Mostly I killed ogres at Northwind or Southwind Cleft, doing a loop round the outside ones and then clearing the caves. They'd respawned by the time I finished the circuit and I never had to travel elsewhere to find mobs.

So another reputation at exalted and one step closer to getting 'the Diplomat' as a title. I'm already 2/21k Revered with Sporeggar and 1/12k Honoured with Timbermaw, so I think I'll finish grinding Sporeggar rep soon. It would net me a Tiny Sporebat, another tabard and another alchemy recipe, after all...

Edit: A massive thanks to WoW Insider for linking me! As I don't play Horde*, I completely neglected to mention the Horde equivalent, The Mag'har. A list of their rep-granting quests can be found here. You'd slay ogres for rep and warbeads in the same way (granting the same rep) and they will reward you with exactly the same talbuks! Happy hunting!


*Except the odd blood elf alt. What? They're the prettiest!
Posted by Aralosseien at 12:04 15 comments: