Three weeks since the last update, huh? You'd think I was slacking or something but that isn't it at all. I've been...uh...saving the world. Yep. You wouldn't believe what nearly happened and how many marshmallows I had to eat to prevent it. 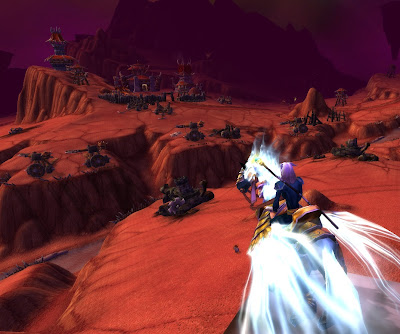 Wildlight has been getting a lot of time recently as I've been running dungeons with my boyfriend's alt which makes it less tiresome. Shadow is still a fun spec for boss fights but I'm getting pretty bored of Mind Flay followed by more Mind Flay. I have noticed that I'm getting to 3 orbs quicker now so it might be looking up, but I'm still wishing for an AoE attack (and to be honest, slightly concerned that I have might have one but not know about it because it seems like such a massive hole in my toolkit?)

About mid-50s I took Discipline as my second spec and have healed a few dungeons! It's pretty good fun - dropping a shield with a heal attached is a big improvement, and Divine Aegis is great - so I'll try to heal some dungeons every few levels and slowly cement my basic Disc knowledge ready for hitting 85. I made the mistake of never playing as a Resto shaman on Shiden and now I'm too chicken to heal on her without a full guild group :( but that's for another day.

The best thing about levelling my priest was picking up some really nice quest rewards and having a sudden inspiration to mog my entire outfit around them. Sure, it's just what I had in the bank so it's not perfect, but it's making me happy to log on and level her now she's wearing a pretty outfit! 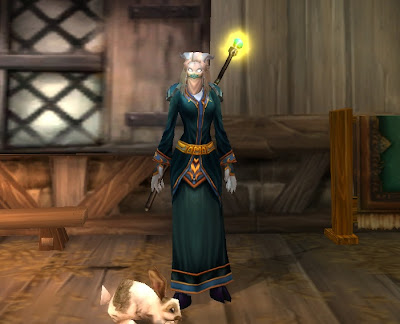 If you're interested, the visible pieces:
Head - Vishas' Hood
Shoulders - Karna's Poncho
Chest - Xakxak's Lab Frock
Hands - Frostweave Gloves
Waist - Dawnspire Cord
Feet - you can't see them on Draenei but you might have to experiment on other races to find a match.

On the professions side of things I finally made the effort to level them a bit. Enchanting is now at the Infinite Dust stage so I'll be collecting materials whilst I'm in the 60-70 bracket before I buy anything extra. I have a fair amount stashed away so hopefully it won't cost me too much! Engineering is on the back burner until I can be bothered to go and mine up lots of Thorium on my gathering alt and Inscription is likewise in need of some herbs. If only I wasn't so lazy! The Darkmoon Faire is on this week though so I've grabbed 5 points in all three professions and saved myself another chunk of materials, so it could be worse.

That's about it for now! I have a few days off this week and I'm hoping to powerlevel Wildlight into Northrend at the very least (dungeons until 62 because I refuse to quest through Hellfire Peninsula again), so we'll see how that goes.

If you have a pre-Mists list, how is it going? Have you met some/all of your goals yet? I'd love to know :)
Posted by Aralosseien at 04:29