It's OK To Love Plate Dresses

Some people dislike the idea of plate dresses. That's fine for them, but what about those of us who prefer a dress silhouette for our characters? I won't lie - there aren't a lot of options but I've rounded them up below for your delectation. Also, Warriors and Death Knights rejoice! There is the potential for you to aspire to our elegance and style. I know this is the news you've been waiting for while you clunk around in your plate trousers.

As an aside, this is mostly a paladin issue - we are the only plate-wearing class with some skirted tier sets. I do wonder if this is because we have a healing spec and healing is perceived as 'what girls like to do' but that's rampant speculation and I'm not qualified to figure that one out. Gender, dress and perception is one hell of a minefield, y'know. If one of you is more of the arts-educated, thinking persuasion feel free to ponder on this and let me know!

The chest piece of the paladin Tier 12 armor. This is the only chest slot model that comes with a skirt attached! Items for each spec are named differently but are completely identical in appearance. 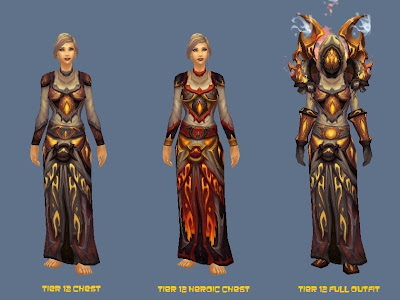 All pieces are from Firelands or other sources of the same item level.

Tier set is paladin only, off-set pieces could be obtained by any plate-wearing class.

I really love this set and fully plan to drag my guild into Firelands at some point to get me the head and shoulders!

The leg piece of the paladin Tier 8 armor. Items for each spec are named differently but are completely identical in appearance. 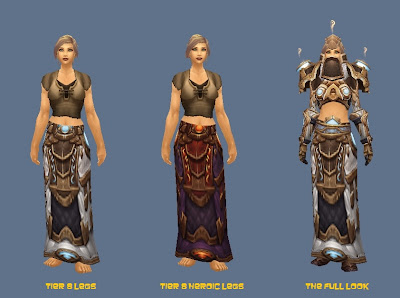 Here are a couple (of many) options for the other slots:
Belt: Blinding Girdle of Truth for 1650 VPs / Girdle of Valorous Deeds from Aeonus, Black Morass
Feet: Silver Sabatons of Fury for 1650 VPs
Bracers: can't be seen

The good news is that you can get the legs from two different places, so if you wanted to build a mogging set around them you don't have to be raiding Ulduar. The older tier sets are a pain to acquire because every slot was token-bought but don't give up! Speak to your friends and guildmates - this tier had some good gear for all classes and more of them might be willing than you think. There are two recolors of this set but they have legs rather than a skirt, which is a shame.

The leg piece of the paladin Tier 2 armor. 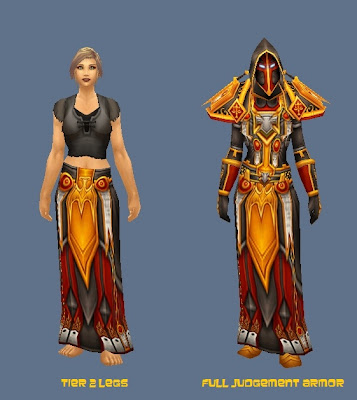 This is one of the most popular paladin sets in the game and is easy to farm nowadays. As well as being very intricate, every piece of armor contributes to the look so you'll need all 8 pieces to nail it.

Cassock of the Loyal (Judgement Recolor, any plate-wearing class)

This is the leg piece of the Judgement Recolor, a dungeon set obtained at level 68-70 in Burning Crusade dungeons. 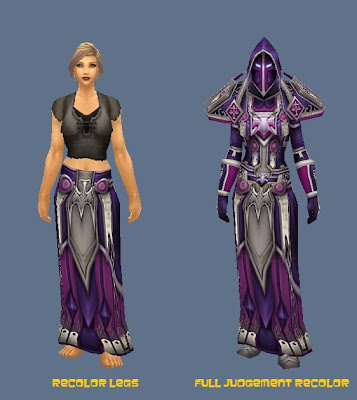 A popular recolor of a popular tier set! Easily farmable nowadays. As with the Judgement Armor, you'll need all 8 pieces to complete the look.

The leg piece of the paladin Tier 10 (lower) armor. Items for each spec are named differently but are completely identical in appearance. 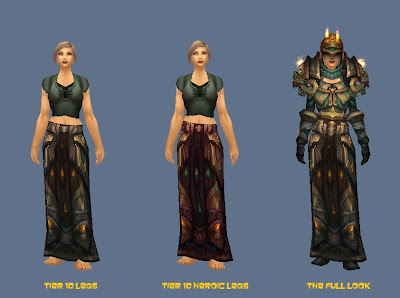 Tier set is paladin only, off-set pieces could be obtained by any plate-wearing class.

I was really excited about being able to pick this set up (head and shoulders included!) for Justice Points. There are loads of belt models that would blend in with this set and any dark boots would look fine.

The leg piece of the Death Knight starter gear. 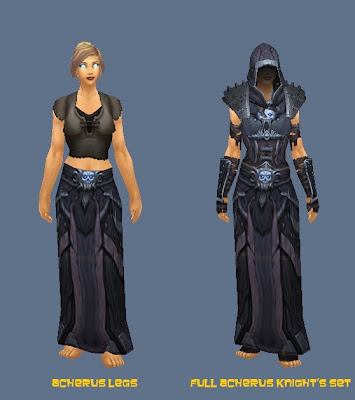 The full set can only be bought by Death Knights as it's sold by Quartermaster Ozorg in Acherus. It would be easy to change any of the slots to jazz this up a bit - plate with grey colour schemes isn't rare at all.

Well, that's it - all the dress silhouette avenues you could explore. I know that I'll be farming Justice Points for the Lightsworn set and picking up one or both of the Judgement sets. What about you? Are you a fan of plate dresses or do you skip over them in favour of legs (or do you not care in the slightest as long as it looks good)? I'd love to hear your thoughts.
Posted by Aralosseien at 06:39