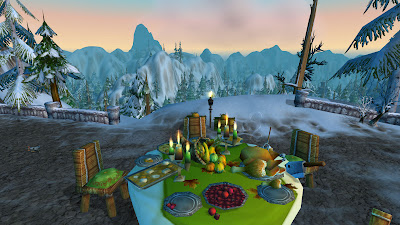 Autumn is here! In theory, that would mean vibrant colours on the trees, crisp blue skies and switching my drinks preference from refrigerated coke to hot chocolates. In Leeds, it's meant lots of slippery leaves on the dark walk home, constant grey skies for weeks and consequently not enough sunlight to keep my half-plant system running. Pilgrim's Bounty starts on Sunday 20th November though and I need 4 more achievements to get my <Pilgrim> title. Not to mention the adorable turkey pet I missed out on last year.

There are 9 achievements per faction for this holiday and all 9 will be required to get the meta achievement and glory. There's no holiday boss but this festival has long been the perfect chance to level your cooking skills! Two of the achievements require you to cook all 5 of the Pilgrim's Bounty dishes so your first priority should be getting cooking to 280 on any character you want these achievements for.

It's as simple as it sounds. Sit yourself at a Bountiful Table, found outside any of the faction capitals. There must be another player sat at the same table. Target them (this bit is important) and then 'pass' any of the foodstuffs to them. Do this a few times and you'll get your achievement.
Now We're Cookin'

You'll need to cook each of the following dishes (requirement in brackets):
All ingredients can be bought from Pilgrim's Bounty Vendors near the feast areas but some can only be bought in one city (see Pilgrim's Progress for locations). You'll be cooking these dishes for the daily quests so consider it a bonus!
Pilgrim's Progress
For this achievement you need to complete each of the Pilgrim's Bounty dailies at least once. You see? Two achievements for the price of one, my friends. The dailies are:

The main ingredient for 4 dishes can only be bought/hunted in one zone:


Possible Horde order: Hunt turkeys and buy pumpkins in TG. Take to OG, hand in turkey quest and buy cranberries, also do stuffings quest. Take pumpkins to TB, hand in pumpkin quest and buy sweet potatoes. Go back to TG (via OG if easier), hand in the cranberry and sweet potato quests.

Simply acquire the Spirit of Sharing buff from each of your 4 faction capitals. This means you stuff your virtual face with each of the 5 foods at a table and are rewarded with a 10% reputation gain buff for 1 hour. Make sure you do FOOD FIGHT! while you're sat at one of the tables. I would space completion out to give yourself a full 4 hours worth of the buff - I'll pick mine up just prior to raids and other reputation-granting activities throughout the holiday!
Pilgrim's Peril
I know what you're thinking. Peril? Peril?! They've all been very peaceful so far but true to form, you're getting sent into enemy territory. Not to bring back crucial information or assassinate a key leader - to sit at their feast tables in your finest attire. That'll learn 'em.
The daily quests (which you have to complete for Pilgrim's Progress anyway) each reward a choice of items. Make sure that you take at least one of the following:
Put your chosen finery on and visit each of the 4 enemy faction capitals. You only have to sit in a chair to meet the achievement criteria so it's ok if you die immediately afterwards.

Sharing is Caring
Rest easy, fellow feasters. After the stress of taunting the enemy at their own feast tables we're back to something easier. Simply pass one of each dish at one of your Bountiful Tables to pick this one up.

You're likely feeling a little full right now. Let's walk (or fly) it off with a journey to Outland! Head for Sethekk Halls, the dungeon in the east side of Auchindoun, Terokkar Forest. It's a 69-72 dungeon on normal so take the necessary amount of friends for your level. You must defeat Talon King Ikiss, the last boss of the dungeon, whilst wearing two items of festival clothing:
Since you already needed the second part for Pilgrim's Peril this isn't a big ask. If you can, run this dungeon in heroic mode so you also get a chance to farm Anzu (a heroic-only boss) for the much-coveted Reins of the Raven Lord.

For this one, you must kill 40 Wild Turkeys without dropping your stacks of the buff this gives you. This achievement is a little bit of an RNG-game but there are a few things you can do to improve your chances. Alliance routes that seem to work well are to run a circle around Eastvale Logging Camp or Westbrook Garrison, both in Elwynn Forest. For the Horde it seems that the area south of the Scarlet Monastery in Tirisfal Glades is a good spot. (NB: Elwynn Forest/Tirisfal Glades are the spawn areas for the Wild Turkeys. Turkeys elsewhere like Fjord Turkey or Highlands Turkey don't count for this achievement).
Instead of killing the turkeys as soon as you spot them, spend a few seconds locating the next one, and kill the one you're at just before the stacks drop. There is nothing worse than killing all the turkeys you can find and then failing while you futilely search for others - trust me on this, it's the reason I don't have it yet! Lastly, I've seen a quite a few people recommending Tracker Snacks and I'll be trying those out this year myself.

Lastly, the old favourite - finding race/class combinations to prank. For this festival the prank is turning them into turkeys using Turkey Shooters and it's happening to everyone's favourite class. Rogues! Here are the ones to look out for:
I'm hoping to get this by hovering around Stormwind and Orgrimmar as I do for other festivals but if pickings are slim I'll head into some battlegrounds and check out the opposition. The downside to this achievement is that the Turkey Shooters are rewards from the dailies and each is single-use so you'll need 8 of them. A neutral faction capital was also a big help in the past. I'm interested to know which way people find this easiest so drop your stories into the comments if you'd like to!
Tips so far: Rades suggests checking out the Molten Front daily quest hubs or the Firelands raid entrance as safer places for finding enemy rogues.

Follow this mini-guide for easy cooking success! Thrill even your enemies with the power of your tasty dishes!


From 0-355 in one festival. That's time worth putting in. Pro tip: Tracker Snacks requires cooking 400 so you aren't far off that with this guide. If you can cook them it might be worth putting some on the AH in the early days but demand will drop off quite quickly.


That's Pilgrim's Bounty! Let me know how you get on or if I can help you in any way. I'm Hellfire-EU (A) and can indeed cook Tracker Snacks if you need some ;)
Good luck!
Ara

There will be pictures here, I promise! Just waiting for the festival to start...*taps feet*
Posted by Aralosseien at 17:16