It seems like these updates are the only thing that I have time for at the moment. I want to do a big achievements roundup but honestly, it'll have to wait until I have a few hours to link everything up and give it the effort I want to. Real life crits hard, kids.

Biggest news is that Shiden hit 85, finally! She's great fun to play and I've started running some normal dungeons with guildies to gear her up. I have to say, watching Elemental Overload proc on a Lava Burst and seeing two go shooting off at enemies is an absolute blast. Slightly nervous about trying out a Restoration spec so I'm going to gear up to about ilvl 378, reforge to suit needs and then start with normals while I put theory into practice. If I'm not a great shaman healer that's fine - the list only demands that I try healing everything once! 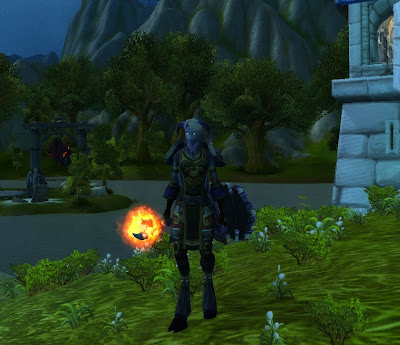 Skinning hit 525 without any effort whatsoever, but even with the Darkmoon Faire daily this month, leatherworking is stuck a few points below 525. I need to get out there and farm some Savage Leather, or just give in to temptation and buy it...I hope that profession material requirements are lowered at some point in the future because the sheer amount you need to hit each threshold often prevents you from making anything useful as you level. By the time I can make the leatherworking epics I'll likely have picked up better gear from dungeons with a lot less effort.

The problem with that final push to 85 is that it's killed my levelling drive. The next nearest alt is Wildlight at 37, with Lóthwen at 28, and both of them need to hit 85 so that I can max their professions. I can't muster up the energy for another two long, long grinds and have been bumming about getting Outland dungeon reps on Ara. Still, the list is a focus not an obligation and I'm not at the stage where I'm about to level when I don't want to. Fingers crossed that I can fit in the odd level here and there before I lose the habit! [Update: I did 3 levels on the priest tonight, and it was good fun. That might be because I'm at the bar fights and riverboats section of Thousand Needles, though!]

In other news, I removed engineering as a second profession for Lóthwen because Wildlight already has it and there's no way I'm levelling it twice. Being a hoarder I have tonnes of cloth stashed away and I've decided to make her second profession tailoring. There are a couple of BoP recipes for tailors that are really nice so I want at least one cloth-wearing alt that can make the most of them.
Posted by Aralosseien at 15:14