Weeks 6 & 7: The Fortnight Of Busy Times

Ok, I know, this is the second time I've run two weeks together. Taking over for my boss while she's on maternity leave before cover for my job has been organised means I've had a lot less time for blogging stuff. At nearly two months in to this challenge, I've not got nearly as far as I thought I would have done. There's a blood elf hunter and an undead mage that have a lot to answer for! My desire to make new alts hasn't diminished since I made the bucket list and they've probably stolen about 10 hours between them.

Despite that I've still made some really good progress and I'm so close to another level 85 alt that I can taste it. So to update, in the last couple of weeks:

We ran Ulduar as a guild last night when we'd finished clearing Dragon Soul and Ara picked up 260 a/p from that alone! I've never seen further than the first 3 or so bosses and I was blown away by the scale and beauty of that raid instance. It's so refreshing to be in different rooms/environments for different bosses - I really hope that Mists brings us some large-scale epic raid instances along those lines. I didn't manage to pick up any mogging gear (everything that dropped was perfect for my absent paladin, QQ) but I had an absolute whale of a time and I'm only 3 achievements away from Glory of the Ulduar Raider and a Rusted Proto-Drake. Oh, and I picked up my Starcaller title :)
Speaking of proto-drakes, a couple of guildies were kind enough to come along for Abuse the Ooze so I finally picked up my Red-Proto Drake to round off the evening in style.

Morríghan has been running some more normal dungeons and has done the quests for all of them except Throne of Tides - seriously, you can't do the quests without completing the entire zone? - and level 85 is so very close now. Her rested bonus should run right the way up to that so I'll be begging a couple of dungeon boosts and questing the rest of the way through Uldum until I get there. Frost DPS is becoming a lot of fun but I still panic quite a bit in dungeons! Shiden has got a lot of levelling love in the last fortnight and is really close to level 57 now. Elemental shamaning is SO MUCH FUN. The great thing about levelling post-transmogrification is not missing out on awesome-looking gear and that's making questing for the rewards even more fun than it was. For example, I'd normally sigh when the reward was a helm, shoulders, cloak or chest because I'm using heirlooms I can't replace, but now I can save the good-looking pieces for a reason! I've been trying to level leatherworking as I go but I just don't skin enough leather to do so :( it's a massive problem, really. What's the point of having low-level gear recipes that I can't make for myself? Luckily I should be able to use it for crafting rogue and hunter gear once I've got Shiden to 85 and can farm whatever leathers I would need to max it, but I still get really grumpy about this.

I pushed Wildlight up to 30 so that I could grab my dual-spec and then promptly couldn't decide which one I wanted. I guess if I don't plan on healing anything it doesn't matter yet though. Getting Shadowform was awesome and she feels like a proper shadowpriest now rather than a lowbie priest alt so I think she's about to get some serious playtime in. 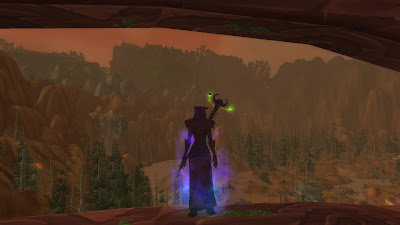 Lastly, I was hoping to get all my sub-10 alts up to 10 and choose their specs but it hasn't happened just yet. One more week and they'll all be proper characters, I promise!