Armed with good intentions, unbending resolve and invaluable support from you, my lovely readers, we come to the first Bucket List update. Thank you for all the comments and encouragement you left on the original post!

I'll try to keep these posts short and sweet:


Oh, Sugarstorm, with your pink pigtails and your Very Light Sabre. You've captured my heart. Who knew that the way to enjoy a warrior alt was to roll a non-serious one? 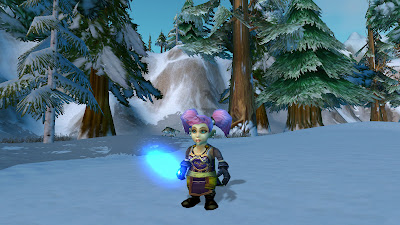 Doing a little bit of inscription was a nice change of pace - it's been a while since I was working on a profession at that level. Instead of buying the materials on the AH I took my flower-picking death knight to Stranglethorn Vale, which is a great zone for herbs that mill into Golden (common) or Burnt (rarer) Pigments.

I left the warlock race decision to my other half by telling him he had no choice but to roll an alt with me and that it was worgen or dwarf. Turns out he hadn't done the worgen starting zone yet, so worgen it was. I enjoyed it a lot more as a pair than I did running through it solo, perhaps because it alleviated the feeling of being stuck there alone. It was satisfying to see his reactions as things fell apart and were flooded during the earthquakes too!

While I'm here though (because this is my blog and I can grump if I want to), something that still bugs me is the way they designed female worgen bodies. If you ignore the head, hands and feet, it looks like a normal human body to me. Is that really the best Blizzard could come up with? In my opinion it's lazy design. They are capable of better - there's a pair of fingers crossed here that female Pandaren don't end up the same way.